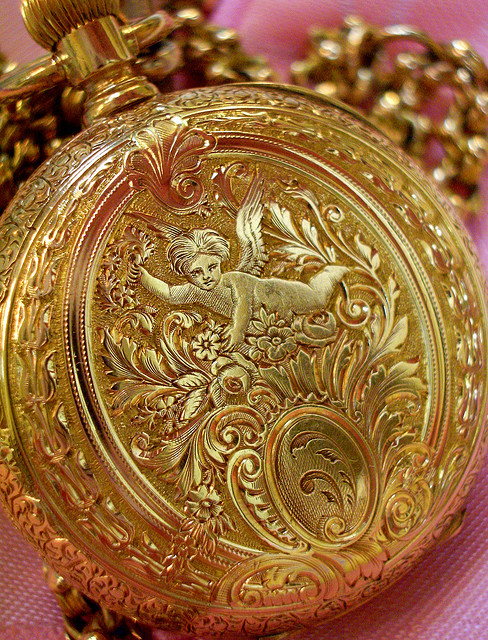 The Hayes Pocket Watch is relic of the Hayes family of Atlanta, Georgia. Manufactured by hand 1720, it was infused with a trapped Manitou by the scion of the Hayes line at the time, Lionel Hayes of London. The watch is unusual because it has 13 hours on its face. This Manitou endows the holder of the watch with mystical powers (most of the time) based on when the watch chimes when called up.

The watch itself is a beautiful timepiece, filigreed gold and crystal face. On the inside of the clasp is an engraving reading "Hayes 1720."

Essentially, the watch bearer must hit the watch’s catch and the hands will spin and hit a random hour and chime. The power granted varies according to the chime. This must be done at dawn or dusk to enact the power for the next 12 hours. Draw a card to simulate the hour:

As is seen above, the Manitou trapped in the watch is a powerful one. If bearing the watch while casting a Hex and you suffer backlash, suffer double the stated effect. If the Manitou is to be battled, use Spirit 13 as the score to beat (so long as it is the higher of the two).

Also, if the bearer tries to trip the power twice in a twelve hour period or at some time other than dawn/dusk, he risks unleashing the Manitou (Spirit 13 battle or Manitou takes over for 2d6 hours).