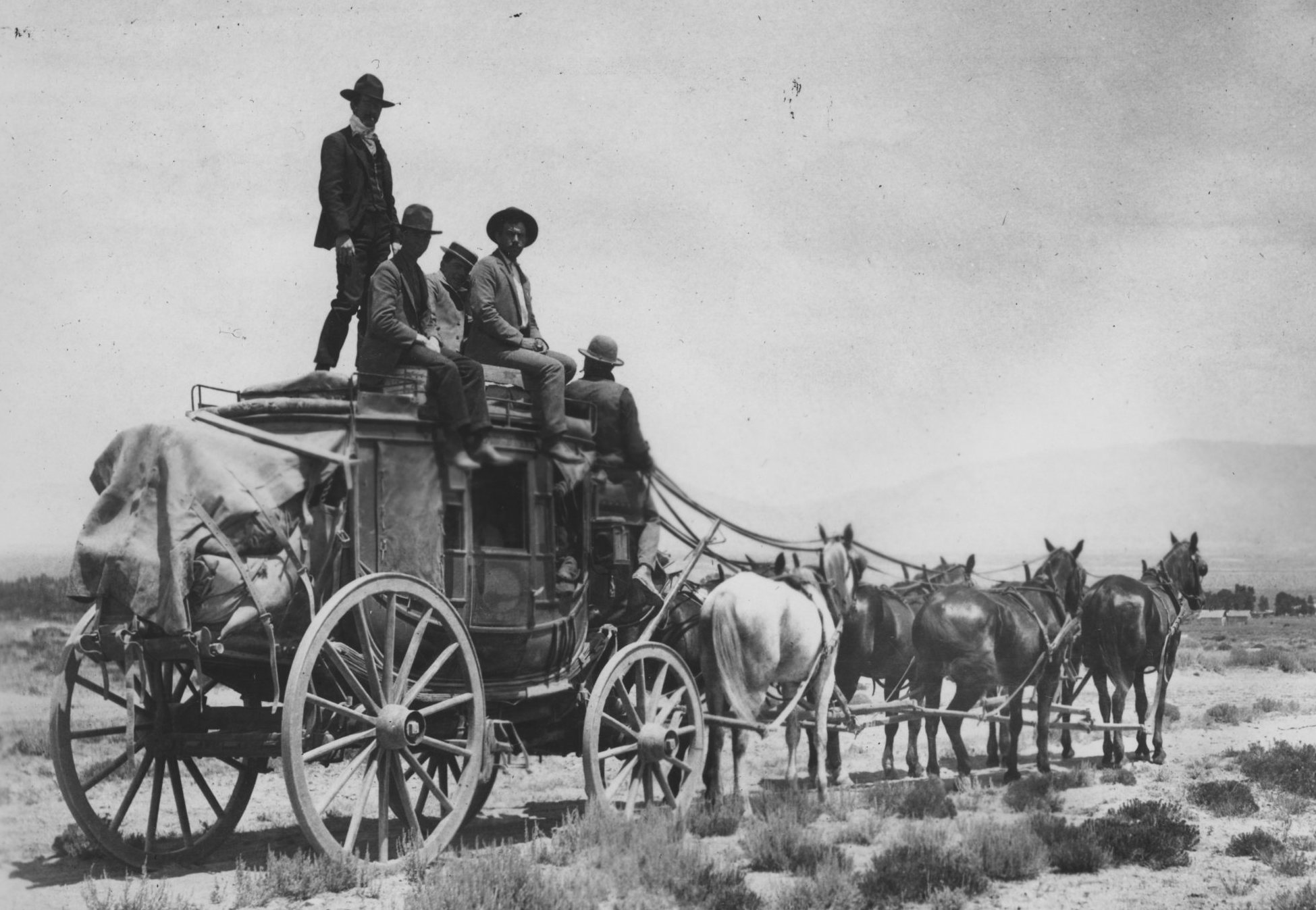 Though stagecoach travel for passengers is uncomfortable, it is often the only means of travel and is certainly safer than traveling alone. If passengers want to sleep, they are required to do so sitting up and it is considered bad etiquette to rest ones head on another passenger. There are also numerous other rules required of passengers including abstaining from liquor, not cursing or smoking if ladies were present, and others.

For long distances, stagecoaches are faster than riding alone. The drivers stick to well-known routes (often likely places for ambush, by the way), and they change horses about every 15 miles or so to keep up a good steady pace. In fact, most reputable lines average about 100 miles per day.

Stagecoaches are more comfortable than riding your own animal. The coaches hang by leather straps to take away some of the bounce. Concords, by far the most popular model, fit nine in the passenger compartment and as many can hold on up top.  Six horses are typical, but stages used for shorter routes might only use four.

These figures are based on a typical 8-hour day. Stages make better time because its animals are changed every 15 miles. If a lone rider somehow has the luxury of changing horses often (like a Pony Express rider), he can average about 80 miles a day. 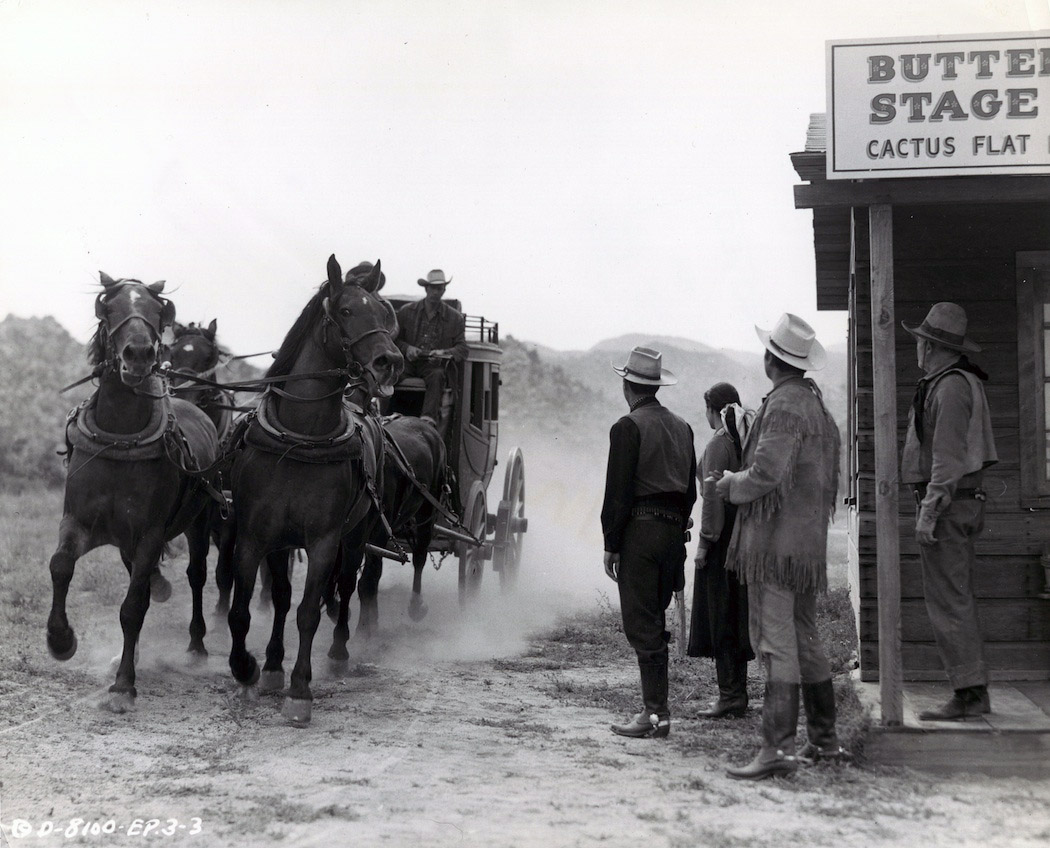 Along the many stage routes, stations are established about every 15 miles that included two types of stations — "swing" and "home." As the stage driver nears the station, he or she blows a small brass bugle or trumpet to alert the station staff of the impending arrival.

The larger stations, called "Home Stations," are generally ran by a couple or family, are usually situated about 50 miles apart, and provide meager meals and overnight lodging to passengers. Often, however, "lodging" is no more than a dirt floor.

These stations also include stables where the horses could be changed and often, a blacksmith and repair shop, in addition to a telegraph station. Here, drivers are usually switched.

The more numerous "swing" stations, generally run by a few bachelor stock tenders, are smaller and usually consist of little more than a small cabin and a barn or corral. Here, the coach will stop only about ten minutes to change the team and allow passengers to stretch before the coach is on its way again.

Though there are numerous smaller lines throughout the Weird West, the most prominent transcontinental line is clearly Wells, Fargo, & Co.

Throughout the 1840s and 1850s, there was a strong desire for better communication between East and West. The California Gold Rush of 1849 precipitated a large amount of need for communication and transportation to the Pacific from points East.

In the late 1850s, Congress authorized the Postmaster General to contract for mail service from Missouri to California to facilitate settlement in the west. The Post Office Department advertised for bids for an overland mail service on April 20, 1857. Bidders were to propose routes from the Mississippi River westward.

A mail contract would be a coveted commodity for any express company. Several prominent businessmen across the country answered the call. The Post Office Department received nine bids to choose from. 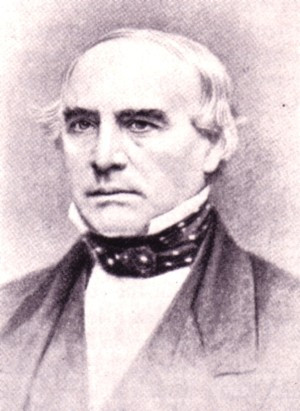 John W. Butterfield and his associates  (including William G. Fargo—more on him later) created a proposal for a southern route from St. Louis to California. The Postmaster General, Aaron Brown, was from Tennessee and favored a southern route. Although none of the bidders had provided for the route, the Postmaster General advocated a southerly route, known as the Oxbow Route, with the idea that it could remain in operation during the Winter.

This route was 600 miles (970 km) longer than the central and northern routes through Denver, Colorado and Salt Lake City, Utah, but was snow free. The bid and route was awarded to Butterfield and his associates, for semi-weekly mail at $600,000 per year. At that time it was the largest land-mail contract ever awarded in the US. The contract with the U.S. Post Office went into effect on September 16, 1858.

In March 1860, the Overland Stage Company was taken over because of the debt owed to the Wells Fargo Company (remember William G. Fargo?) and as a result John Butterfield was forced out of the business. Butterfield's assets, as well as those of the Pony Express, were to wind up with the Wells Fargo partners—but that's another story.

The line continued to operate as Butterfield Overland Stagecoach Company despite the change in ownership. In March 1861, before the Civil War had actually begun at Fort Sumter, the US Government formally revoked the contract of the Butterfield Overland Stagecoach Company in anticipation of the coming conflict. An Act of Congress, approved March 2, 1861, discontinued this route and service ceased June 30, 1861. 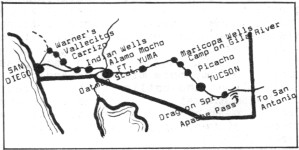 The smaller Texas-based line, the San Antonio & San Diego (aka "The Jackass Mail") had its route supplanted by the Butterfield route, making much of its business obsolete. It reorganized and merged its interests in 1861 after the Butterfield lost its mail contract, forming the Overland Mail Corporation. The Confederate States of America granted Overland a mail contract and it started using the old Butterfield routes through the southwest for the CSA.

Despite the many dangers posed in the southwest, and the ongoing war, the company still maintains its contract—mostly by the force of will of its leader, George Henry Giddings.

Ben Holladay created the Overland Stage during the height of the 1849 Gold Rush. He moved to California from Weston, Missouri in 1852.

Holladay acquired the Pony Express in 1862 after it failed to garner a postal contract for its owners, Russell, Majors and Waddell. In 1861 he won a postal contract for mail service to Salt Lake City, Utah, and established the Overland Stage Route along the Overland Trail to avoid confrontations with American Indians on the northern Oregon Trail and Pony Express routes. He added significant infrastructure along the trail, including Rattlesnake Station.

Between the Overland Trail and six other routes, Holladay received government subsidies totaling nearly $6 million over a four-year period. Holladay sold his stage routes to Wells Fargo in 1866 for $1.5 million. 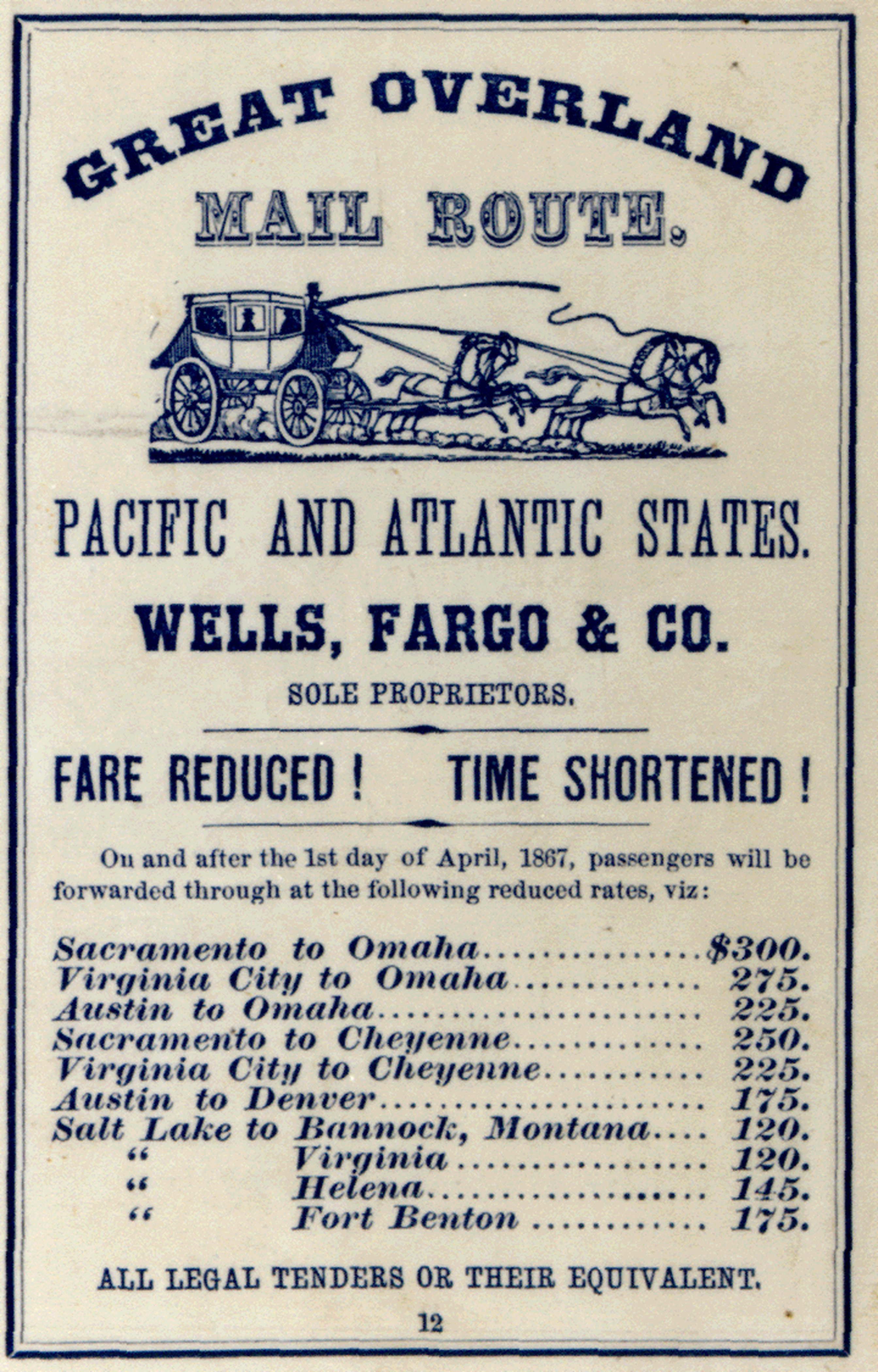 Henry Wells, founder of Wells and Company, and William G. Fargo, a partner in Livingston, Fargo and Company, and mayor of Buffalo, NY from 1862 to 1863 and again from 1864 to 1865, were major figures in the young and fiercely competitive express industry. In 1849 a new rival, John Warren Butterfield, founder of Butterfield, Wasson & Company, entered the express business. Butterfield, Wells and Fargo soon realized, was destructive and wasteful, and in 1850 they decided to join forces to form the American Express Company to compete against Butterfield. 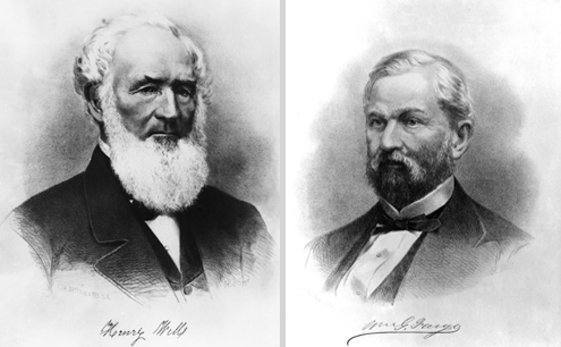 On March 8, 1852, they organized Wells, Fargo, & Company. From the beginning, the fledgling company offered diverse and mutually supportive services: general forwarding and commissions; buying and selling of gold dust, bullion, and specie (or coin); and freight service between New York and California. Express and banking offices were quickly established in key communities bordering the gold fields, and a network of freight and messenger routes was soon in place throughout California. Their policy of subcontracting express services to established companies, rather than duplicating existing services, was a key factor in Wells Fargo's early success. 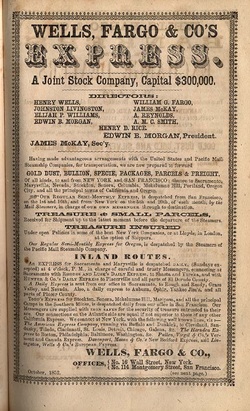 From 1855 through 1866, Wells Fargo expanded rapidly, becoming the West's all-purpose business, communications, and transportation agent. The company developed its own stagecoach business, helped start and then took over Butterfield Overland Stagecoach Company, and participated in the Pony Express. This period culminated with the 'grand consolidation' of 1866, when Wells Fargo consolidated the ownership and operation of the entire overland mail route from the Missouri River to the Pacific Ocean and many stagecoach lines in the western states.

By 1866, another rival, Ben Holladay, had built a staging empire with lines in eight western states and was challenging Wells Fargo's supremacy in the West. A showdown between the two transportation giants in late 1866 resulted in Wells Fargo's purchase of Holladay's operations. The 'grand consolidation' spawned a new enterprise that operated under the Wells Fargo name and combined the Wells Fargo, Holladay, and Butterfield Overland Mail lines and became the undisputed stagecoach leader.

Wells Fargo is the well-established leader in the express business for the West. They continue to operate a private express line between San Francisco and Virginia City, Nevada and continue its stagecoach runs to mining camps in more northern locations.

The Stage in Nevada

The Old Barcelona Express runs between Virginia City, Pioche, and Paiute Springs. It is maintained by Cassius Wick for its owner, Octavius Gass of Las Vegas Rancho. It makes its run every two weeks.

As the railroad continues to push westward, stagecoach services become less and less in demand. With the completion of the transcontinental railroad, and the onset of such devices as steam wagons and horseless carriages, will stagecoaching come to an end? Hard to say. There are still remote areas that do not receive rail service that need packages and people to be delivered. Until the newfangled devices that these scientists are coming up with are more reliable and affordable, common folk will still rely on the stage.