Originally settled as a Mormon fort, Las Vegas Rancho is now a popular stop on the Old Spanish Trail. It lies between Paiute Springs and Pioche in Lincoln, County, Nevada in the Las Vegas valley. It is owned by Octavius Gass. 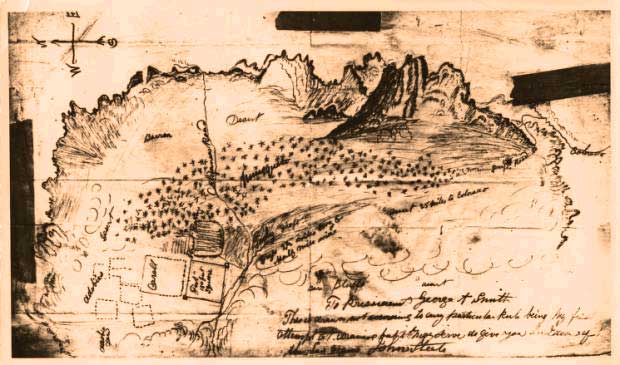 Mormon missionaries arrived on the site on June 14, 1855 and selected a site along one of the creeks that flowed from Las Vegas Springs on which they would build the fort. The fort would serve as the midpoint on the trail from Salt Lake City, Utah to Los Angeles, California. It was built originally to protect Mormon settlers from Indian attack. However, the Mormons abandoned the fort due to the onset of the Utah War in 1857.

Around 1860, a small detachment of U.S. Army troops were dispatched to protect settlers at the fort.

Near the beginning of the Civil War, in 1861 the U.S. Army had plans to claim the fort and dubbed it Fort Baker, naming it for Edward Dickenson Baker. In a letter from Col. James Henry Carleton written to Pacific Department headquarters, December 23, 1861, Carleton mentions his plan to send an advance party of seven companies from Fort Yuma to reoccupy Fort Mojave and reestablish the ferry there. Carleton then intended to send on from there three cavalry companies and one of infantry to the Mormon fort at Las Vegas, and establish a post called Fort Baker. This was in preparation for an advance to Salt Lake City the following year. The move to reoccupy Fort Mojave never occurred as planned because Carleton's California Column at Fort Yuma were sent instead into Arizona and New Mexico to evict the Confederates there the next year. However, Fort Mojave was later reoccupied in 1863 by Union troops from California. In 1864, a road survey party led by Captain Price, Company M, 2nd California Cavalry traveled on the route from Fort Douglas to Fort Mojave passing through Las Vegas, stopping for water there on June 10. No mention is made of any garrison there. Presumably the post was never garrisoned.

In 1865, Octavius Gass re-occupied the fort and started the irrigation works, renaming the area Las Vegas Rancho. He eventually bought out his partners and owned all 640 acres outright.

The abandoned fort was in a state of general disrepair went Gass moved in. He and his partners set about the process of repairing the property and turning it into a way station for travelers using the Old Spanish Trail. Gass and his partners began raising cattle and horses. The fields were planted initially with barley, oats, and wheat with a variety of vegetables and melons added by the second harvest. Orchards were added to produce apples, apricots, figs, and peaches. To all this Gass added 75 acres (30 ha) of Mexican pink beans. The local Paiute, used to mesquite beans, considered the pink beans a luxury and Gass used them in lieu of wages when he hired them to work the fields. Wine from the ranch's vineyard became popular with visiting travelers.

Gass spent years of political wrangling against the annexation of the Las Vegas Valley by Nevada. He leveraged much of his influence in the creation of Pah-Ute County in Arizona and lobbied for his property to remain in Arizona. Gass ultimately lost the battle, and great deal of money in the process. As of 1867, Las Vegas Rancho became part of Lincoln, County, Nevada. Adding insult to injury, Lincoln County demanded two years of back taxes from its residents. Over 600 Mormon residents refused to pay and moved back to Utah. This loss of regular customers and the onerous tax burden put Gass in a bad way, financially and politically.

In 1872, Gass married Mary Virginia Simpson, a niece of President Grant, in Pioche, Nevada. He had met her when her caravan had stopped at his ranch in early 1871. Following their wedding, the couple had six children, including a set of twins.

The ranch today (1876) is a popular stop on the Old Spanish Trail. Stages between Pioche and Paiute Springs frequently switch there. Gass and his family are hospitable hosts and always welcome guests to the ranch.