The Great Basin Scientific Society is a non-profit organization dedicated to the promotion of scientific discovery and communication, primarily in the western states of Utah, Nevada, California, and Idaho. The Society claims to advance cause of Science, regardless of political agenda, thus the "international" flavor of its sphere of influence. 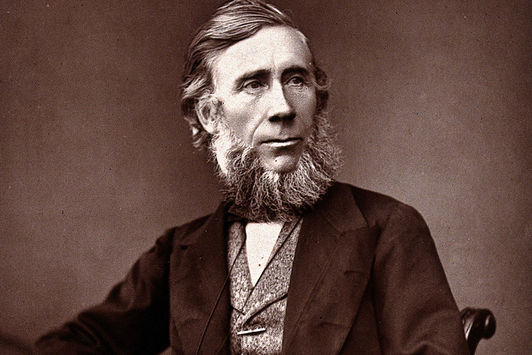 In 1862, Carson City chemist Arthur Gustafsson grew frustrated at the lack of communication between local scientists. He wanted to be able to compare notes, share books, and exchange experiences. That year, he found other scientifically-minded individuals interested in networking and founded the Carson City Society of Natural History.

In 1865, Dr. Gustafsson corresponded with other noted scientists in the newly-formed state of Nevada with an eye to forming a state-wide society. He was also encouraged by the American Association for the Advancement of Science in his endeavors, with the Carson City Society of Natural History being formally charged to take the initiative in forming a state society. Much of the organizational work was done in the town hall at Carson City, Nevada. The first meeting of the Nevada Society of Science was held December 29, 1865 in the Comstock Arms Hotel. Approximately 35 people attended the meeting.  The society was formally organized, and a constitution and by-laws were adopted. Dr. Gustafsson was elected unanimously as its first President.

In 1868 came the ghost rock boom and the explosion of scientific discoveries across disciplines that the substance propelled. Talk began of expanding the influence of the Society into more of a regional influence. Further, the interests of the region were more paramount to Dr. Gustafsson, an avowed pacifist, than the political interests of the ongoing War. He began contacting colleagues in California, Idaho, and Utah to see what they thought of his scheme.

The proposal was mostly met with positive reactions. California was still reeling from the tragedy of the Great Quake and all communication—much less specialized communication—was touch and go. Idaho was still largely a wild country and in need of a civilizing influence (at least in the opinion of those that Dr. Gustafsson heard from). 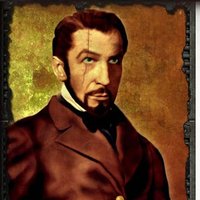 And then there was Utah. A lot of great work was coming out of Salt Lake City—especially from Dr. Darius Hellstromme. If Dr. Gustafsson could secure Dr. Hellstromme's support, then everything would fall into place nicely. Unfortunately, Dr. Hellstromme never sent Dr, Gustafsson a response and has largely ignored the Society to this day.

Even without Dr. Hellstromme's support, Dr. Gustafsson was able to move forward. In 1870, a gathering of great scientific minds descended upon Virginia City, at the Miner's Union Hall. Over a period of two weeks they hashed out the constitution and by-laws of the newly formed Great Basin Scientific Society.

The first formal meeting of the Great Basin Scientific Society took place on October 22, 1870. Forty-three members were in attendance. The constitution and by-laws were accepted and the first officers elected. Once again, Dr. Gustafsson was elected as the first president. One of the Society's first order's of business was to absorb the dealings and membership of the Nevada Society.

Annual meetings of the Society are held each Fall in a rotation around the charter region: Virginia City, Salt Lake City, Boise, and Sacramento. The first committees to be appointed reflect some of the early interests of Society members: Ghost Rock (Practical Application), Cooperation of Educational Societies, Plan for Publication, Regional Library, Incorporation, Legislation for Protection of Native Birds, Dividing the Society into Sections, Preservation of Aboriginal Earthworks, and Relations of the Academy to Regional Governance. The first paper sessions included papers from various fields of study and were presented in general sessions. 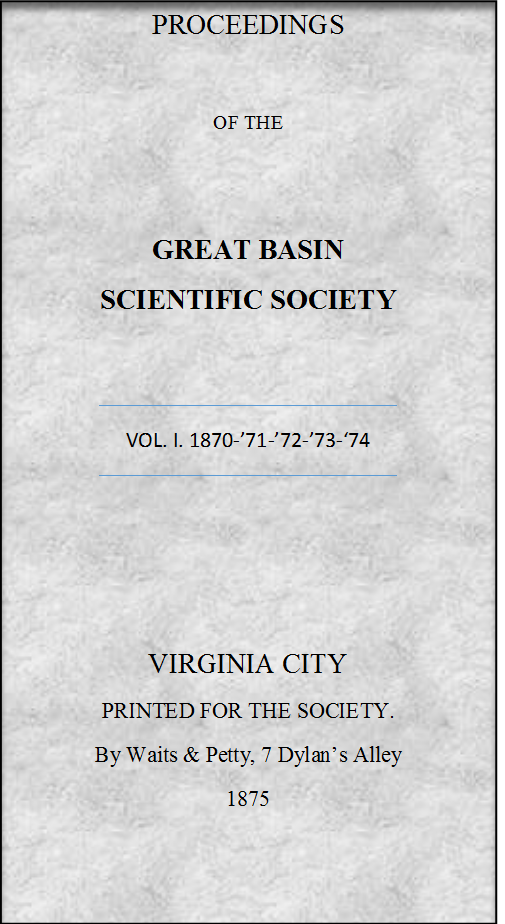 The first volume of the Proceedings of the Great Basin Scientific Society, published in 1875, covered the 1870 to 1874 activities. This volume was financed by individual and business contributions and printed in Virginia City. A plan to seek federal aid for publication was launched in 1873 and was approved in October of 1874.

The Great Basin Scientific Society is professional scientific organization of Western scientists. It is a not-for-profit organization dedicated to promoting scientific thought, sound research principles, and diffusing scientific information; to encouraging communication and cooperation among scientists, and improving education in the sciences.

Membership in the Society is contingent upon review by the Membership Committee. Factors under consideration are:

Members pay an annual membership fee of $10 to the Society.

The Great Basin Scientific Society recognizes individuals exhibited extra ordinary loyalty and effort to the Society and to Science. Nominations for any of the awards are accepted throughout the year up until July 1 of each year for consideration for presentation at the Fall meeting.

A Fellow is a member of the Society (minimum of 5 years) who has demonstrated service to the Society and to the advancement of science in the West; service to education in science; and achievements in scientific research.  Nature of service to the Society includes attending Great Basin Scientific Society meetings, presenting papers at meetings, publishing in the Proceedings; serving as an officer, as a section or committee chair, as a committee member; playing a role in organizing Society activities.

The Officers may select and honor individuals as Fellows annually. Each new Fellow shall be introduced at the general assembly of the annual meeting. The President shall bestow each Fellow with a Society pin.

The Distinguished Scholar Award of the Great Basin Scientific Society is bestowed upon individuals who have been recognized by the Society as having an exceptional record of scholarship.  Award recipients have been selected by the Officers, and acknowledged through awards made at the annual Society meeting.

The Officers may select and honor one Society member each year for his or her outstanding scholarship. The awardee shall be introduced at the general assembly of the annual meeting.

The Distinguished Service Award of the Great Basin Scientific Society is bestowed upon individuals who have been recognized as having supported the Society through service exceeding any normal expectation.  Award recipients have been recognized by the Officers, and acknowledged through awards made at the annual Society meeting.

The Officers may select and honor one Academy member each year for his or her outstanding service to The Society. The awardee shall be introduced at the general assembly of the annual meeting.

Officers are elected at the Fall meeting and serve a term of January through December of the following year.

The Officers are comprised of:

The following are typical committees for the Society: