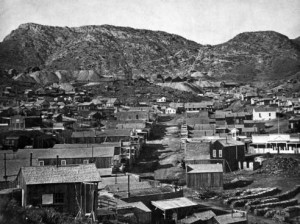 Pioche is the county seat of Lincoln County, Nevada. It lies some 198 miles north of Paiute Springs, Nevada and some 180 miles north east of Las Vegas Rancho. It is named for François Louis Alfred Pioche, a San Francisco financier and land speculator. It's current (1876) population is approximately 4,000 people and declining.  It sports numerous saloons, brothels, two breweries and two newspapers.

The area was settled in 1864 with the opening of a silver mine.  The original settlers abandoned the area when local Indian tribes launched a series of raids and massacres. Recolonization launched in 1868, after this was stopped and François Pioche bought the town in 1869. By the early 1870s, it had grown to become one of the most important silver-mining towns in Nevada. In 1871, the Nevada Legislature moved the county seat to Pioche from Hiko. In 1872, the population was just over 6,000, with reputedly over 72 saloons and various red-light districts with numerous brothels adding to the chaos of the town.

Although Pioche never dies, it burnt up and flooded several times. One of the major fires, on the September 15, 1871, was just after a day of glorifying the occasion of the Mexican Independence. Shortly after midnight, flames were seen to issue from the rear of a restaurant on Main Street. However, the fire was not the worst of it. Stored in the cellar of a leading mercantile store were 300 pounds of powder. When the powder went off it gave a shock that shook the surrounding mountains to the core. Some reports say that thirteen were killed and forty-seven injured. Some 200 to 300 people remembered what it was like to sleep out under the stars again—at a cost of $500,000. As if this was not bad enough, again, on the May 5, 1872, the town lost twelve buildings at a cost of $50,000. This was followed by August 22,1873, when a flood occurred after receiving 3.4 inches of rain within two hours, with damage at $10,000. On the morning of May 3, 1876 a destructive fire ripped through the town, causing the loss of twenty-one buildings and an estimated $40,000 in damages.

Because of the remoteness which had allowed the Indian raids to occur, the town has a reputation for being one of the roughest towns in the Weird West. Local lore says 72 men were killed in gunfights before the first natural death occurred in the camp. This legend is immortalized by the creation of Boot Hill, complete with "Murderer's Row", a section of the cemetery in which over a hundred murderers are said to have been laid to rest.

In 1873, the Nevada State Mineralogist reported to the State Legislature "About one-half of the community are thieves, scoundrels and murderers and then we have some of the best folks in the world, and I don't know but our lives and property are just as safe as with you. You can go uptown and get shot very easily if you choose, or you can live peacefully. I will send you a paper with an account of the last fight…I was in hopes eight or ten would have been killed at least, as these fights are a pest in the community. Peaceful! Sure, if you stayed out of the way of the bullets."

However, by 1875, Pioche's rough reputation began to wane. This was largely attributed by locals to the large influx of the "the fairer sex" to the male-heavy mining town, imposing a civilizing influence. A local " Single Men's Protection Association" was even formed to protect the town's rough-and-tumble reputation. Regardless of the true cause, the fact remains that crime rates continue to decline in the county seat relative to previous years.

Nowadays, Pioche is as peaceful as any other Western town—which isn't saying a lot, one supposes. But it isn't nearly the rough-and-tumble mining town it once was. 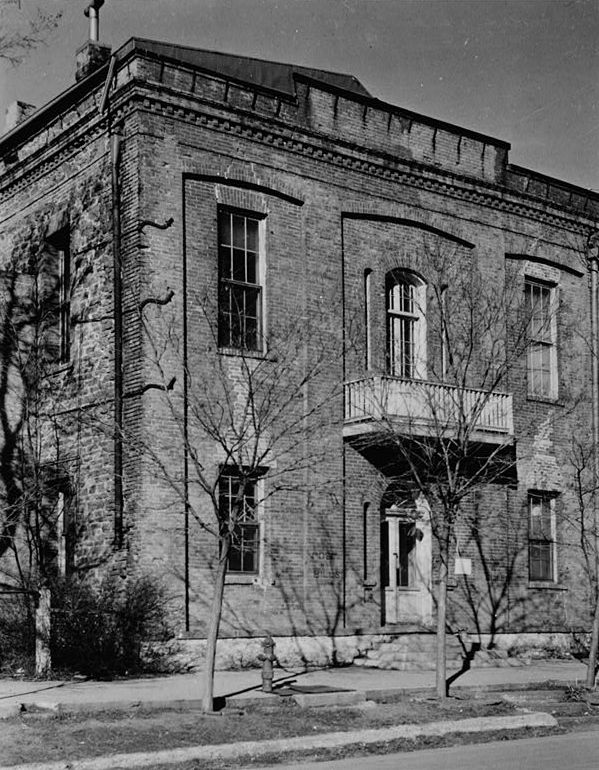 Pioche is also known for its "million dollar courthouse," built in 1872. The original cost of $88,000 far exceeded initial estimates and was financed, and refinanced with bonds totaling nearly $1 million. The Million-Dollar courthouse was designed by Edward Danahue. It was constructed of brick, stone, and borders on the 'Classic Revival' style of architecture. The courthouse is still not paid for, with that debt's resolution nowhere near in sight.