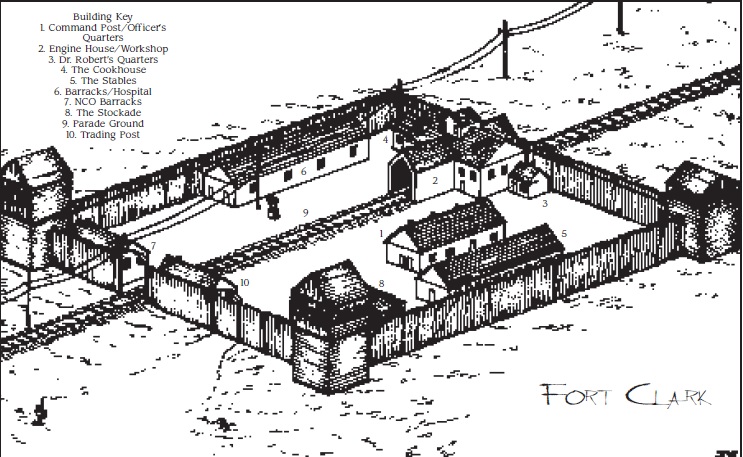 Fort Clark lies along a "military-only" spur of the Denver-Pacific line that runs down to Fort 51 from the main line that runs east-west from Denver to Virginia City. Fort Clark is about 250 miles north from Fort 51.

McNerlin is a career officer w 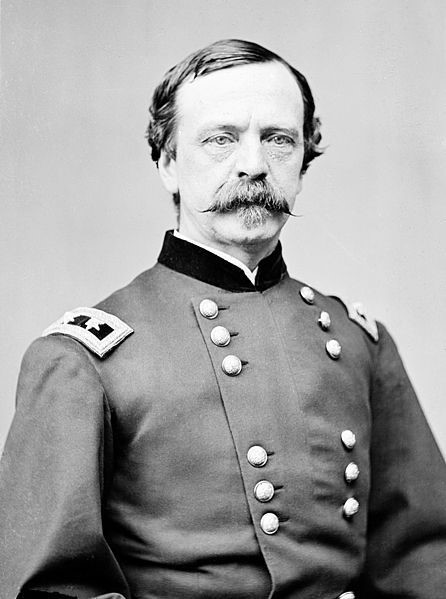 ho has served since the beginning of the war.  He is a strict, no nonsense, by-the-book type.

During the most recent conflict at the fort, in which a band of "Wichita Witches" from the Black River rail line had aligned themselves with the Confederates and his own scientist, he had proven to be an able commander, though with a blind spot as far as his own prejudice against a certain Lt. Goree. Goree was killed in that action, though not due to any actions or inaction on the part of McNerlin. 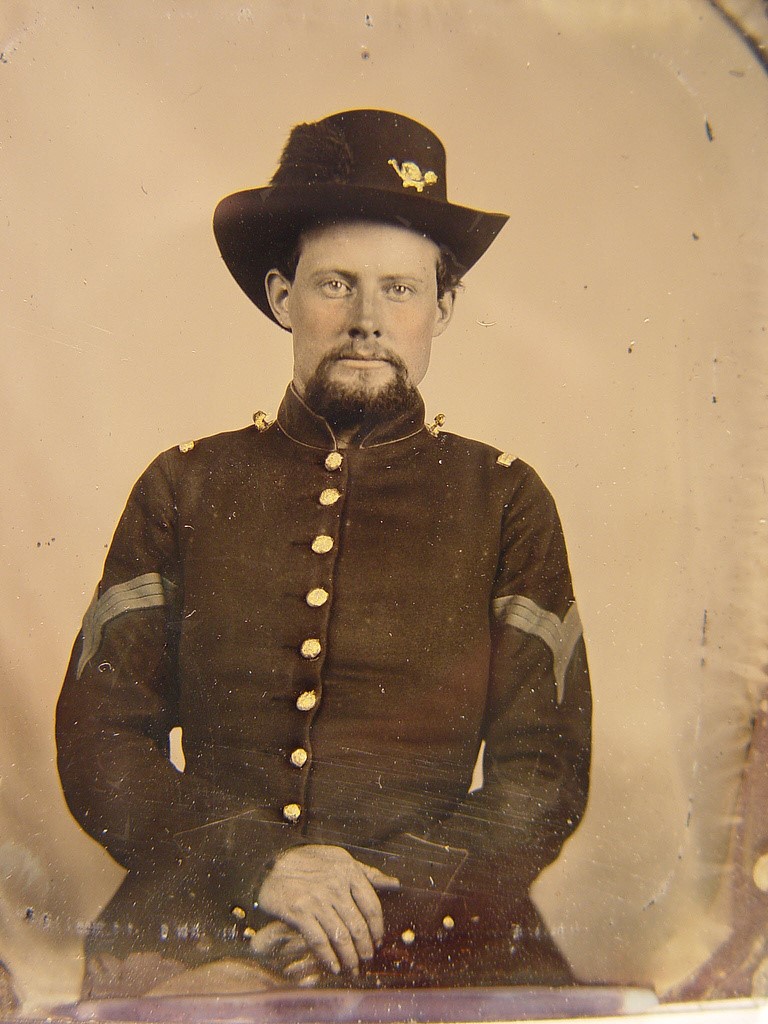 McElroy has been serving in the US Cavalry since before the beginning of the Civil War.  He’s a big strapping Irishman, equally fond of a good drink or a good brawl.

He originally built a still to supplement the one-drink limit at the trading post, but he ended up with more whiskey than even he could drink. He decided to sell some to the local Indians so he could stash the money away for his upcoming retirement. This was until the late Corporal Whitetail turned him in to Colonel McNerlin. He held a grudge against the big Indian after that, which cast suspicion on him when Whitetail turned up dead. However, it was later revealed that Whitetail was most likely killed by what can only be described as a "rock creature."

Goree is a soft-spoken, easy-going young man. He tries hard to hide his Louisiana accent, but it occasionally slips. He's originally from New Orleans, but he is 100% loyal to the U.S. of A.

Despite his laid-back manner, he is an excellent officer with a promising career—if he can convince of Col. McNerlin of this. Col. McNerlin believed that Goree had taken advantage of his daughter, Maureen, while she was at the fort. This is untrue, but he has been unsuccessful in dissuading the colonel of the notion.

Lt. Goree died in the recent action against the "Wichita Witches."

Steen is a good-natured boy from Nebraska who just can’t seem to get a break. He joined the Army to see the world and got sent to Fort Clark. On his first patrol, he slipped and gave away the patrol’s position. The bandits the group was tracking opened fire, and one of the patrol’s scouts, Bud Robbins, was badly wounded.

Steen is a friendly, talkative sort and curious beyond belief. This has gotten him into trouble a number of times (people mistakenly believe he’s a Pinkerton), but he still hasn’t learned to keep to himself.

Steen was murdered by the strange "rock creature" that ran rampant in the camp recently. 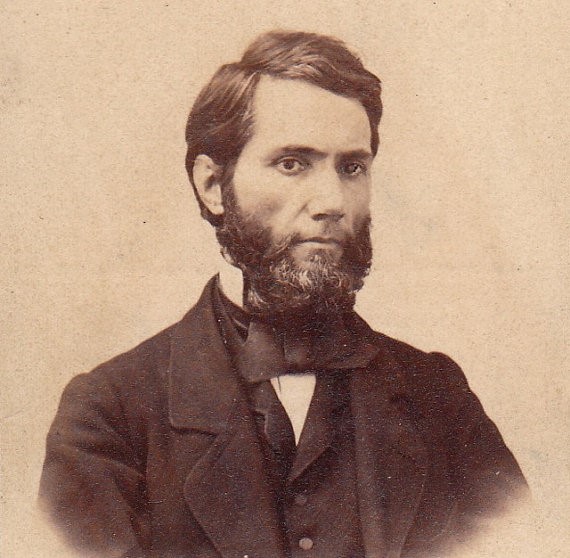 Roberts is a petty man dissatisfied with his place in the world. He actually has a knack for inventing, but his poor luck has prevented him from capitalizing on his gift.  Rather than learn from his mistakes, however, he’d rather blame everyone around him for his woes.

It has been recently revealed that Roberts was colluding with either the Confederates or with the Black River rail line to sabotage the fort and leave it vulnerable to attack. He is currently being held on charges of treason and is being shipped to Fort Leavenworth, Kansas.

Mandy is a moderately attractive woman in her late 40s.  She owns the trading post, having inherited it from her late husband who died of pneumonia a few winters back. She secretly pined for the late Lt. Goree, who was completely unaware of her desires.

Robbins is a local settler who hired himself out to the garrison as a scout. He refused to actually join the army.  McNerlin normally wouldn’t stand for this, but Robbins has proved invaluable.

If Robbins wasn’t so useful, the colonel would have thrown his carcass out for the crows long before. Bud is a lecher, a drunk, and a braggart, but charming in a larger-than-life sort of way. He has spent the last month recovering from the wound he received while on patrol with Elbert (this is why he wasn’t with the ambushed patrol). He spends his days getting drunk at the trading post on his own private stash of whiskey.

Bud has a Sharps Big .50, a peacemaker, and a large hunting knife which he is fond of twirling while he talks.

Bud was recently murdered by the "rock creature" who terrorized the camp.

Ivery is a wildcat miner who drifted into the area and stayed. The term “miner” is used in its loosest sense. Ivery is too lazy to make a living at it.  He prospects until he hits a likely looking silver vein and does just enough to have legal claim to it.  Then he sells the claim to the first yahoo who happens along. Once he runs through his money drinking at the fort, he goes out and does it again.

Ivery wants to make Mandy Graves the next Mrs.  Rancid (a nickname he gained from his habit of slicking his hair down with lard). He carries a double-barreled shotgun and a pick. 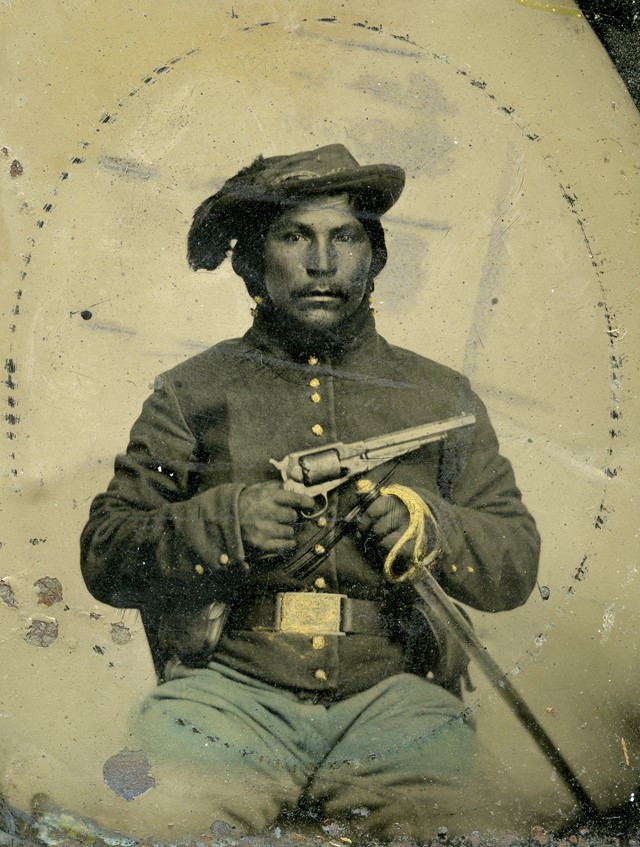 Being half-Indian has made life in the US Army difficult for Whitetail, but his duties at Fort Clark have not forced him to do anything which might hurt his people. In trying to help them, though, he hurt himself.

Whitetail discovered that Sgt.  McElroy had a secret still up in the hills outside the fort. He was brewing whiskey and selling it to the local Indian tribes.

The corporal reported this to the colonel, who acted on the information. McNerlin sent a squad up into the hills to smash the still and busted McElroy from Master Sergeant back to Sergeant.

Since that time McElroy has made Whitetail’s life Hell, giving him all the unwanted duties.

Whitetail was later murdered by the "rock creature" that terrorized the camp.

Below is a list of the important locations in the outpost.

Description: At the south end of this rectangular, log building are Colonel McNerlin’s quarters and office. Both are Spartan. Only a few framed citations decorate the walls.

The north end of the building is divided into two rooms, each intended to house two junior officers.

Description: This is the largest and most substantial building on the post. Unlike the other buildings, it is constructed of brick.

The engine house dominates the southern end of the fort. The train tracks which run through the post pass through this building and then out a gate in the fort’s southern wall.

Inside the building, a number of switch tracks lead off the main line to work bays. Thick chains, used to lift heavy equipment, hang from pulleys on the ceiling. The pulleys are attached to rails and can be pulled around the building.

Occupants: Roberts had been "working" here on a tunnel to let the Wichita Witches into the fort. That tunnel has since been collapsed.

Description: There is a large bin (5’ wide by 10’ long by 3’ high) of ghost rock in the southwest corner of the workshop.

Description: This is a small shack attached to the west end of the engine house. There are two rooms: Roberts’ bedroom and his private workshop. Both look like a Texas twister tore through and left no survivors. Pieces of partially constructed gizmos, copies of New Science magazine, clothes, and scattered papers covered in illegible scrawl cover every exposed surface.

In the back corner of the room is a stove which appears to have been built by Roberts himself. It is buried beneath a small mountain of dirty pots. Each contains a small blackened lump of some unidentifiable substance (Roberts’ cooking). Anyone making an Onerous (7) science: engineering roll realizes that the stove was constructed from a Smith & Robard’s flamethrower.  A  Hard (9) tinkerin’ roll can disconnect it from the stove and get it working again. Roberts’ tinkering has lowered its Reliability to 14.

Description: This is a squat, brick building attached to the east of the engine house. It has a small kitchen and enough tables and benches to seat most of the garrison at full strength.

Description: This is a typical stable of wood construction. There is room for up to 30 horses here, but currently there are only four.

Occupants: Two soldiers are here during the day to care for the horses. If anyone has stepped on Sgt.  McElroy’s toes, they spend time here mucking out stalls.

Description: The trading post is a neat, clapboard building with a large front porch.

Most basic equipment and firearms are available here. The store is also the closest thing the troopers of the garrison have to a saloon. McNerlin allows the sale of liquor on the post, under the restriction that no soldier may buy more than two beers or one whisky a day. Violators are thrown in the stockade.

Occupants: The store is owned by Mandy Graves. She lives in a small room in the back. She rents out spare rooms to the other civilians in the fort, including Rob Ivery.

Description: A sturdy building of log construction. The northern half of the building is a barracks area; the southern half serves as the post hospital. The post is currently without a doctor.

Description: A sturdy building of log construction. This building has four rooms, each designed to house two men. McElroy has one room.

Description: A sturdy building of log construction. The door is normally padlocked. Inside are two cells which are also padlocked. The only people with keys to these locks are McNerlin and McElroy.

Occupants:  Anyone who got in McNerlin’s way.

Description: This is a large area of packed earth between the main buildings of the fort.