Our fair town of Paiute Springs, Nevada was the victim of unspeakable violence in the twilight hours this morning as a gang of murderous cannibals came tearing into downtown, pounding down doors, destroying property  and attacking people in their homes and on the streets. The gang, whose purpose is at this time unknown, but the subject of great speculation, attacked with brute strength marked with a propensity to bite their victims and tear flesh away with their very teeth.

According to eyewitness reports, the attack began shortly after midnight when the church bell started ringing  and a stranger who had arrived in town that very morning was seen up in the church belfry. That appears to have been the fiends' signal to attack. They came out of the darkness and started assaulting folks in force. Even Ole Svensson, the Herculean silver miner from Virginia City, seemed to have been overcome with the sheer strength of these brutes. He was found dead outside of his tent, his skull cracked open and his brains partially devoured by the devils. He was one of four ultimate victims of the night of violence.  The others, Thomas Mowry, Janine Squarrels, and Matthew King will, along with Svensson, be interred at Paiute Springs Cemetery on Tuesday, January 25, 1876.

Heroes of that night are cited to be our very own Town Marshal,  Lila Kimzey, Miss Geraldine Keeler, and a Mr. Roland Dupre, late of New Orleans. 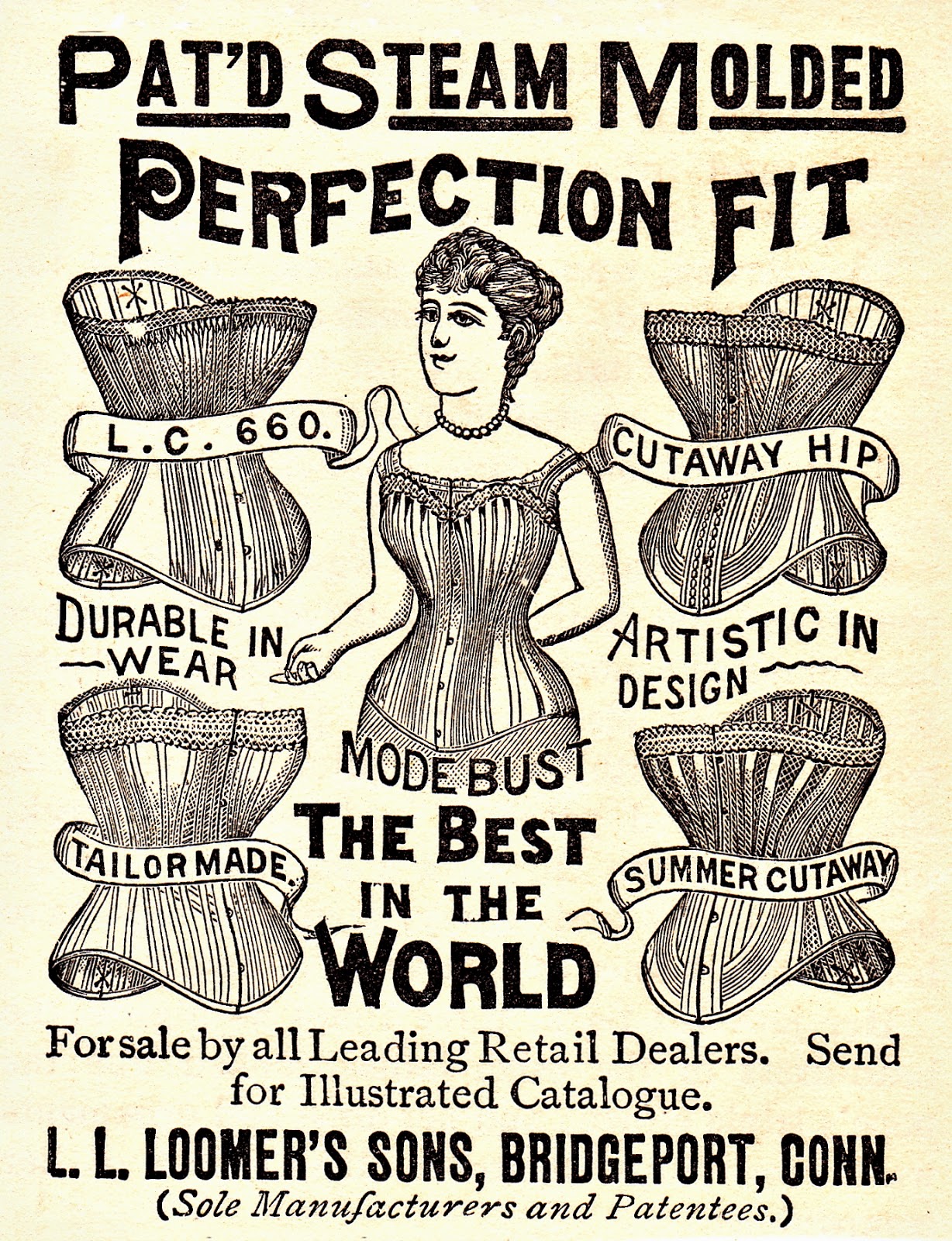 The Assault on Paiute Springs—An Inside Job?

This morning's heinous attack on Paiute Springs may be have been the work of insiders, sources say. Emil Peabody, one of the folks who did his civic duty by helping clean up the mess of the aftermath of the slaughter, confided to your intrepid reporter that the one of the bodies of the fallen cannibals was none other our own Amos Bracken—late of Paiute Springs!

"Oh, it was Amos alright. I'd recognize that gap-tooth sumbitch anywhere," Peabody said. "Of course, that colored feller done put a new hole in his head to match the one Oscar had kicked there, but I'd still recognize him," Peabody reported.

As our dear readers probably recall, the Sentinel had already reported on the death of Mr. Bracken some two week past. He had, apparently allegedly, passed of head injury inflicted by his mule, Oscar. The Sentinel hereby retracts it's earlier statement—it appears its report of Mr. Bracken's death was premature.

As for the other members of the gang, they appeared to be in various states of disarray and dishevelment—most likely itinerants and vagabonds. What drove them to such desperate measures, it is difficult to say at this time. Rest assured, gentle reader, that the Sentinel, "Ever Vigilant," will continue to pursue the truth! 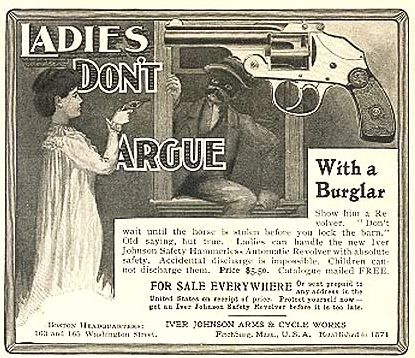 Joint services will be held on Wednesday January 26, 1876 at 9:00 am at the Paiute Springs Church for Ole Svensson, Thomas Mowry, Janine Squarrels, and Matthew King, victims of the Cannibal Night Massacre. 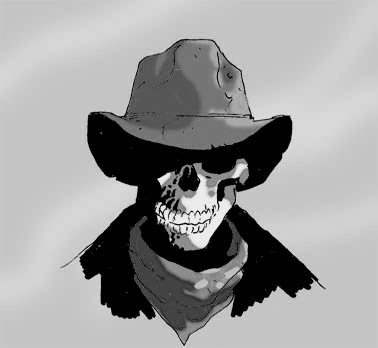 Quiet Sunday worship in Paiute Springs, Nevada was interrupted this week by a strange man who entered the local church in the middle of our own Reverend Timothy Gage's sermon on "turning the other cheek." The stranger, whose visage was covered by a broad-brimmed hat and a handkerchief, strode slowly down the aisle of the house of worship with shock onlookers looking agape.

The stranger then stops a few feet from the pulpit and cocks back his hat and removes his handkerchief. At this point, it was difficult for your intrepid reporter to get a good look, but whatever her saw made the good Revered faint dead away. Then the stranger turned his visage on us and, friends, I have to say what I saw was unnerving to say the least.

His face was like a weathered skull with only a few leathery bits of muscle holding the jaw in place. His empty eye sockets were filled with an eldritch green glow. A single gold tooth gleamed in the man's ghastly permanent smile. Friends and neighbors, I am not ashamed to say that my knees buckled and my guts turned to water at the sight.

Then he spoke: "Tim always did run piss yella'. That's alright. I'll come back later." Then he strode slowly back down the aisle toward the exit.

Needless to say there was must consternation at that man's appearance in the house of the Lord. However, I found very few congregants willing to discuss their reactions to the stranger. More's the pity. Only through shared experience can we learn and grow as a community.

Was it an elaborate mask the man wore? Theatrical make-up? An affectation to instill fear in enemies, much like our Indian neighbors? The eccentricity of a madman? I cannot say, only speculate. All we know is that fear seems to be the calling card of this stranger who seems intent on calling out our good Reverend for intended violence.

Eyewitness reports put the same stranger in the belfry of the church during the cannibal attack this morning. Throughout the assault on our town, the stranger called out for "Tim," referring to him as "lily-livered," "a deserter," "disloyal" and a "traitor." He also said "They that sow the wind shall reap the whirlwind! And no wonder, for even Satan disguises himself as an angel of light!"

After all of the cannibals were dispatched, the stranger made his way out of town, but not before announcing that he'd be back tomorrow at noon to "call Tim Gaught out once and for all."

Friends, to have a stranger such as this in our fair town and this assault occur at the same time is simply a coincidence that beggars the mind. No, the stranger and the cannibals are clearly connected—nay, it is this reporter's opinion that this stranger is the ringleader of that gang. That his actions in the church belfry signaled their attack.

What motivates this stranger and his gang of flesh-eaters? Clearly revenge of some sort against this "Tim Gaught." But who's Tim Gaught? Your dogged reported has yet to uncover a Tim Gaught residing in Paiute Springs. And what connection does any of this have with our good Reverend, for whom the stranger clearly has it out? Rest easy, gentle reader. The Sentinel will shine its light on these mysteries soon enough. 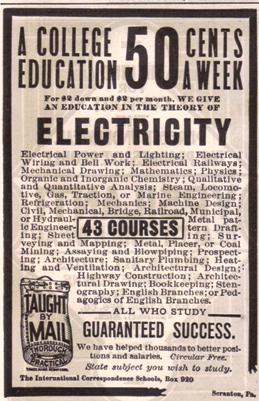 Town Elders Hole Up In Hotel

In the aftermath of the massacre of our beloved town by cannibals this morning, a meeting of prominent citizens—and one noted stranger—took place at the Prince Royal Arms early this morning. In attendance were the Honorable John Paul ("J. P.") Jefferson, mayor of Paiute Springs, "Doc" Glenn Fabry, Town Marshal Lila Kemzey, our own Reverend Timothy Gage, local inventor Miss Geraldine Keeler, and finally Mr. Roland Dupre late of New Orleans, who proved himself an able hand with a gun during the troubles.

In defiance of the principles of a Free Press, public disclosure, and common courtesy, this reporter was denied access to said meeting by Mayor J. P. Jefferson. In no uncertain terms, I was told to "Go home." The fact is, Mr. Mayor, I am home. Paiute Springs is my home. The truth is my home. And I will not be deterred!

What is obvious is that these principals are discussing the response to this stranger's threat. What is not obvious is the form the response can take. Will the town be hiring young Mr. Dupre as a gunman? Will Miss Keeler be formulating some sort of infernal device to protect the town from cannibals? Will J. P. Jefferson do anything to protect his chances for re-election in the next cycle? All of these are on the table at this point. Rest assured, gentle reader, that when the truth emerges, the Sentinel will be there to report it!

Strange Lights To the North

Strange Lights To The North

Prospectors have reported seeing strange lights to the north of town. Speculation is running rampant as to the source of the weird illuminations. Some attribute them to meteor showers, others say they're the result of too much drink on the part of the prospectors. All agree that the source of the light is many miles from the town. Town Marshal Lila Kemzey reports that if they turn out to be anything more than will o' the wisps, rest assured, she'll round up a posse and check them out. Otherwise, she urges citizens to keep calm and mind their own beezwax. Be sure that your Ever Vigilant Sentinel will keep you posted!

Roman and Francis Farrabee have had their first child, a beautiful daughter by the name of Esme. All are welcome to the baby's christening ceremony at the Paiute Springs Church on January 30. Let's show them some support! 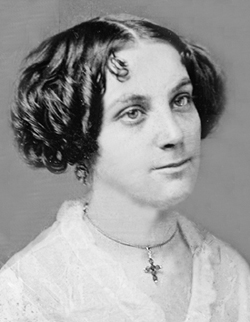 Our very own Ginny Lindstrom, whose velvet tones we have all enjoyed at our esteemed Mayor's Prince Royal Arms restaurant, has secured a permanent contact with Alvin Marstrand Players. This troupe of entertainers, if you recall, visited our fair town, just two weeks hence and plied us with their sounds of the East and South.  They were apparently quite struck with our Ginny and we couldn't be prouder. Be sure and catch Ginny's final performance at the Prince Royal on January 29 at 8 o'clock. 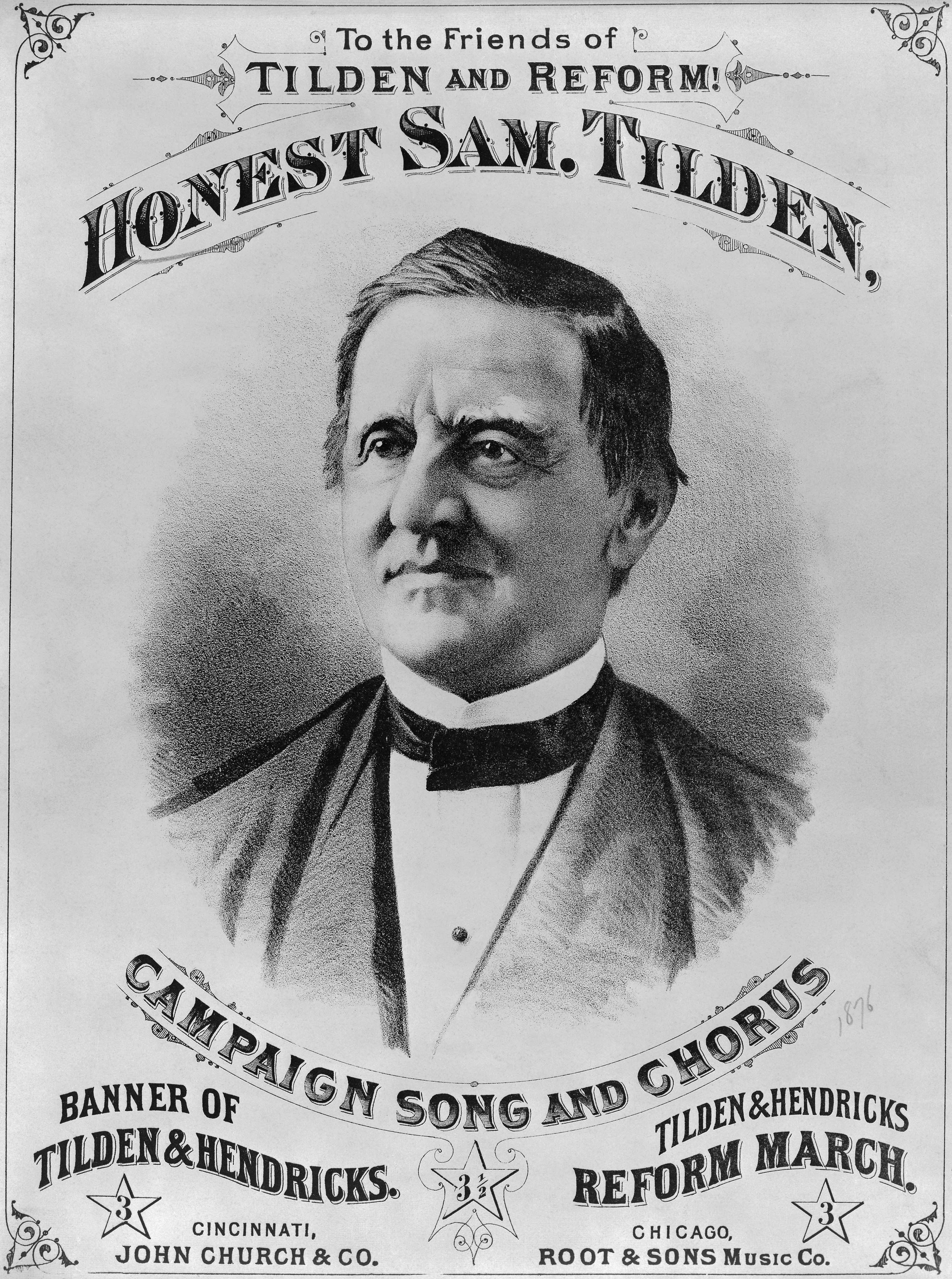 New York governor Samuel Tilden is reputed to be joining the race for President against our incumbent,  Ulysses S. Grant. The election, slated for November of this year, has a lot riding on it—no less than the fate of our war-torn nation. Tilden, a proponent of the "peace" movement which advocates for a more reconciliatory stance with the Confederacy, is thought to have long odds against our popular incumbent. Nevertheless, the war has dragged on for some time and some seek a change. As for the Sentinel, we'll take a "wait and see" attitude before issuing an endorsement.

Dear Aunt Sally, I can't seem to get rid of my corns. No matter what I do, they come right back. Mama told me to put corn flour on them, but that didn't work. What can I do? — S.

Dear S, the best remedy for corns that I have come across is take a rough stone—like pumice—and really grind down that rascal. Then soak your feet in hot water for a little while. Afterward, put some castor oil on the corns. You should start getting some relief soon enough — Yours, Aunt Sally.

Dear Aunt Sally, how do you get boys to ask you to dance. Asking for my lily-livered sis. — A.

Dear A, the best way to get boys to ask you to dance is a winning smile. Practice your smile in front of a mirror until you get it down pat. Be welcoming, but not tempting. Be friendly, but not forward. A good smile opens many doors. And be nice to your sister. — Yours, Aunt Sally.