This is the talisman of personal protection created by the Voodoo Queen of New Orleans herself. It is a small, red velvet bag filled with bits of bone, herbs, blood, and other unknown ingredients that has been hexed by Laveau to give her protection from the spirits.

Power: The gris-gris bag is powerful magic against the Manitou. Whenever the huckster suffers backlash, they can draw again from the Action Deck. If they draw a red card, they can avoid the backlash effects—this time.

Taint: Voodoo Is highly linked to the Reckoners and to the Manitou. If the Queen of Spades is drawn during a hex, have a Test of Wills against a Manitou. If successful, carry on. If not, the Manitou takes over for 2d6 hours.

To have a manitou be in control of his mind and hurting people he cares about. He’s on the inside, looking out, but can do nothing.

Roland Antoine Dupre was born on July 15, 1852 in New Orleans, Louisiana. He was born a freedman in the French Quarter to a carpenter, Louis Jermaine Dupre, and a seamstress, Marie Claire Antoinette Dupre. Roland was the youngest of seven children, four boys and three girls.

The Dupres were a happy family, and Louis and Marie Claire made enough to keep them in diapers for Roland and a roof over their collective heads. Fortunately, they had managed to dodge the flood of 1849 and kept their home—many of their friends were not so lucky.

Roland was a curious child—always getting into things, trying to figure things out. And strange things seemed to happen around him. Doors would open unexpectedly. Drawers would slam shut. His mother even went so far as to ask the parish priest to say prayers over the boy. Nevertheless, Roland grew into a gregarious and friendly young child who often had many friends at the Creole schoolhouse he attended.

Life got hard in New Orleans when the War started. The city was taken in 1862 by Union troops and a naval blockade when Roland was 9 years old. Fortunately, the city was spared fighting in the streets, but the martial law that came soon thereafter was harsh. They even made the Creole children stop speaking French.

Union occupation was short-lived, however. In the summer of 1863, the citizens of New Orleans waged a successful rebellion against the Union garrison. There is much speculation about how such a massacre took place—the most popular is that the rebels slit the throats of soldiers while they slept, but no one has verified the claim. And to this day, the fastest way to close the mouth of a Crescent City denizen to bring up the massacre and ask questions about it. For his part, Roland was eleven years old at the time and knows little of it—only that people he knew seemed grimly pleased about something that had happened. It has little impact on his day-to-day life.

The Union sent ironclads and and troop ships down the river to retake the city—but that flotilla was taken out entirely by mines and obstacles. However, no one can explain how the citizens of New Orleans managed to acquire so much ordinance. Roland heard from old codger about how “’Weren’t no mines! Was snakes! I saw ‘em. Huge black bastards. The Yankees didn’t have a chance!” Roland didn’t know what to make of that.

After that, the CSA sent thousands of troops to New Orleans to help protect their most important port. Baron LaCroix, the head of the Bayou Vermilion railroad, also help bulwark the city against attack and lent a great deal of his labor force to the effort. New Orleans was soon an important city in the CSA. For Roland and his family, this meant very little. As far as Roland’s father was concerned, “we just trading in one set of crackers for another.”

In 1866, when Roland was 14, he started hanging out at the waterfront. He was fascinated by the riverboats coming up and down the Mississippi and the various “fancy” people coming on and off them. One day, one such gentleman, a White man from Kentucky by the name Beauregarde Chalmers, took a shine to the curious young man and hired him to be his valet. He was boarding the boat for a trip to Memphis and thought it would be nice to have the help. Roland ran home and asked his father for permission, got it, and ran back. Little did he know that this trip would change his life.

Chalmers was a gambler of the highest order. He played faro and blackjack, sure, but poker was his primary game. The man constantly cleaned up. After Roland completed his duties—which weren’t very onerous, when it came down to it, he’d wander the ship, poking into cabinets and staterooms, and watch the various games going on in the gaming parlors.

One night, Chalmers was cleaning the table with his competitors and, “just for grins,” let the boy sit in for a hand. Roland won. Pleased, Chalmers let him keep playing. And Roland kept winning. The boy truly had a talent.

Later that night, Chalmers bought Roland a deck of cards and taught him how to do a one-handed cut, told him to practice and keep playing. He felt Roland could make a living at this, like he did. Roland was overwhelmed and swore that he’d keep practicing.

While they were in Memphis, the duo stayed in a hotel on the river while they waited for new passage. Roland was returning to his own room from a roundabout when he stopped and peeked through the keyhole at Chalmer’s room. An eerie light emanated through the portal. Intrigued, he gently opened the door and peered inside. Chalmers was seated at the desk, a set of glowing cards in his hand. He was concentrating, his focus intent on a vase floating above the floor. He had a book open on his lap from which he seemed to be marking a place.

Roland gasped—and the just like that the spell was broken. The vase fell and shattered, Chalmers looked up in alarm and saw Roland. Roland shut the door and ran. Chalmers gave chase, calling the boy’s name. Roland hid in a nearby alley and collected his thoughts.

What did he just see? Witchcraft? Hoodoo? What was going on? Was Chalmers dangerous? No—he was a good man, he could feel it. Then what? What was he going to do now? Finally, he collected himself and decided to go and face his employer.

Chalmers was waiting in his room, a glass of whiskey in his hand. He offered some to Roland, who declined. “I didn’t know what to think about…about what I saw.” Roland said.

“I don’t imagine so. Most people wouldn’t. But I have a feeling you can handle it,” Chalmers said calmly.

“Is it witchcraft?” Roland asked.

Chalmers smiled. “No. Well, not exactly. Depends on your definition, I suppose.”

“Are you a bad man?” Roland asked, his voice shaking.

Chalmers shook his head. “No. I am not. But there are others like me who are. And I try to stop them.”

Roland nodded, once, his mind made up. His natural curiosity won out, his main question answered. “Then how does it work?”

From that moment forward, Chalmers began teaching Roland the ways of the huckster. And Roland proved to be an apt pupil. After the Memphis trip, Roland stayed on as Chalmers’ valet and student for the next six years. Chalmers traveled up and down the river and sometimes out west into Texas. The Kentuckian taught Roland everything—hexslinging, gambling, the art of the gun, and the ways of the arcane. Roland came to think of his employer as a mentor and a friend.

One night in 1870, the two were playing poker in Nacogdoches, Texas. Tensions were running high because Roland was winning against a Confederate sergeant who had come to the table late and imposed himself on the game. The sergeant kept trying to agitate Roland into drawing on him, but Roland let all the insults and slurs slide off his back. Didn’t stop him from taking the peckerwood’s money, though. Finally, the Confederate had enough and accused the young man of cheating.

“Ain’t no way no coon can play poker like that. You gotta be cheatin’,” the sergeant jeered, his hand hovering over his .36 Navy pistol tucked in his belt. Roland looked at him steadily over his shaded spectacles.

“No cheating here, mon ami. Just skill. Tell you what. I buy you a drink, what you say? We end this game now as friends?”

“Shee-it. Friends with a coon. That’s rich. Why don’t we step outside and settle this game like real men?”

Chalmers drawled. “He’d have to get another partner for that to happen, Johnny Reb.”

“Coon-lovin’ Yankee sympathizer!” the man was getting highly agitated now. “I oughta draw on the both your sorry asses!”

The proprietor of the saloon came over and told them all to simmer down or get the hell out. Roland shrugged equitably and started collecting his winnings. “Seems we’re done here, friend.”

The Confederate pulled his piece. “Put that money down, coon.”

Roland cocked an eyebrow, but stopped collecting the cash. The Confederate kept his piece on Roland and Chalmers and used his other hand to collect the pot. Then he collected the money in front of Roland. “For your sass.”

The proprietor could be seen ducking out the door to fetch the town marshal.

Suddenly a gust of energy enveloped the sergeant and threw him across the room. He dropped the cash as he went and smashed against the piano. In his surprise, he fired his piece as he flew. The patrons were all shocked, looking around to see who had thrown the loudmouth or what had tripped the man up. Roland looked behind him.

Chalmers looked back at Roland, a small grin of surprise on his face. His waistcoat grew steadily darker, from an emerald green to a dark black. A smoking hole marred the exquisite garment right over the left breast.

Chalmers cocked his head and chuckled. A bubble of blood came out of his mouth. “I’ll be damned. What’re the odds?” Then Roland’s friend collapsed and breathed his last.

The sergeant was court martialed for the death of Beauregarde Chalmers and was sentenced to military prison. At least, that’s what Roland heard. He collected what he could of his winnings and got the hell out of Texas. That was no place for a black man to be when there was blood in the air.

Roland returned to New Orleans and tooled about, plying his trade and poking his nose in various places it didn’t belong. One such place was in the affairs of Madame Marie Laveau. But that’s his story for the tellin’…

Now he has traveled West to seek his fortune, like so many young men in this Age of Steam and Steel. He has found himself in Paiute Springs, Nevada and hopes to establish himself there, for at least a little while, to make more of a stake to head further West.

He died at the hands of a specter during the assault on Paiute Springs made by The Man in Black and his dark minions. 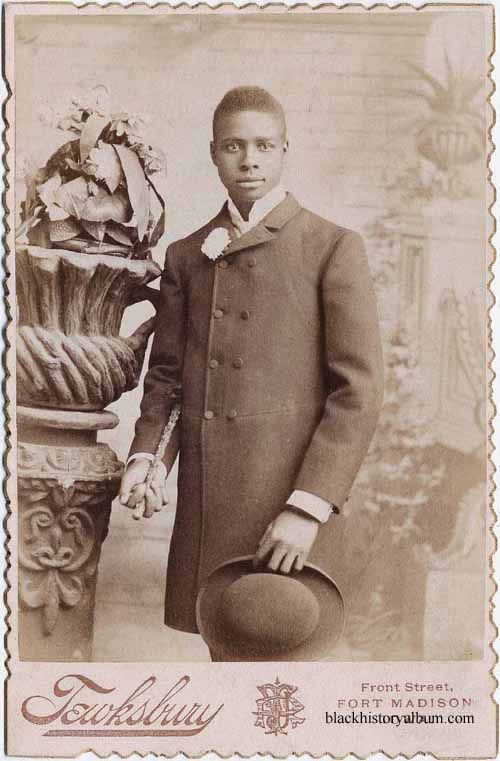