Ethan Jennings was recruited by Lila Kimsey to be her deputy after being a shotgunner for the Old Barcelona stage line. He’s a got a steady eye and is a good shot with a scatter gun. He’s loyal and a good egg. He’s an amiable sort, a bit of an antidote to Lila’s saltiness.

Ethan was killed while trying to apprehend an assassin that was sent from Pioche to kill Dr. Barnabas Henley, a mad scientist who may have testified against a prominent citizen Paiute Springs before he was killed, himself.

Ethan crawled back up 6 days later, Harrowed and confused. He now stays in what used to be Abe Rawlins’ cabin about 15 miles out of town in the Spring Mountains. After the assault on the town by the Man in Black, Ethan has been reinstated as Deputy Town Marshal. He often wears a porcelain half-mask to make his Harrowed visage a bit more palatable. To strangers, citizens just say that he received a facial injury in the course of his duties. 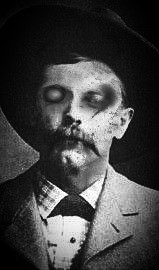