Hoax Revealed! The Camp Reaper is No Spook 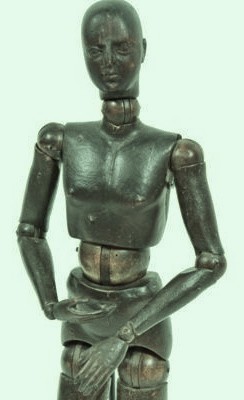 The Sentinel, your source for Truth, has secured an exclusive interview with local scientist Miss Geraldine Keeler regarding her latest discovery on behalf of the populace of Paiute Springs.

There have been rumors of late of a "camp reaper" floating about the mining camps that surround the town. It moans as it floats on a bed of vapor and goes about frightening the miners, who fear that their death has come for them. This illustrious journal reported on these rumors in our previous August 6th edition. Miners were beginning to leave our fair town as a result of the troubles.

Well friends, we've been snookered! Miss Keeler and her boon companion, Roland Dupre, managed to track this "reaper" to its source and have discovered that it is no reaper at all but some sort of "mechanical," an automaton made of steel and with jet contraptions that make it float on ghost rock vapor.

I have seen the device, unveiled and defrocked, with my own eyes, and ladies and gentlemen, it is, indeed, nothing more that steel and clockwork and the work of our own vivid imaginations.

The device has been secured by Town Marshal Lila Kimsey and locked in the vault at the Paiute Springs Bank, where whomever has been controlling it can't get to it.

But who is responsible for this hoax? And why would they do it?

Miss Keeler would only say that there was an "ongoing investigation." But Marshal Kimsey revealed a bit more. "The perpetrator of this crime is known to us and we will be questioning him forthwith. In the meantime, let me and my associates do our flippin' jobs," said the Marshal.

As far as why, the only speculation that Marshal Kimsey would give was that it was to scare miners into giving up their claims. But for what purpose, no one seems to know or want to guess.

So, friends and neighbors, be not afraid! For the reaper has NOT shown himself in our camps—only the old sins of greed and spite.